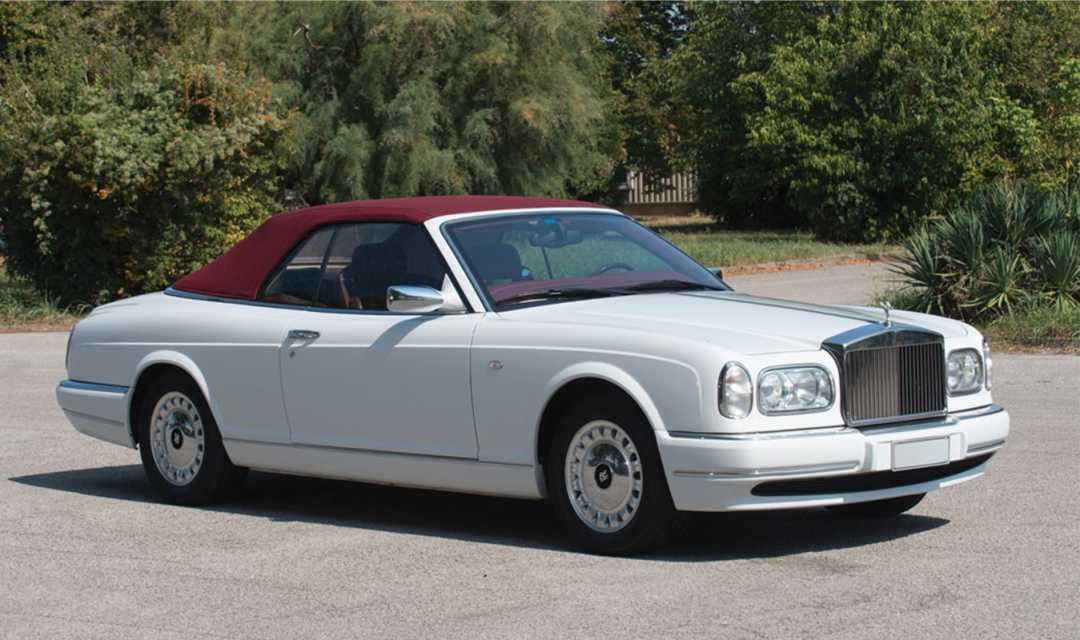 The Rolls-Royce Corniche V was the most expensive Rolls on offer when it was in production. As the only Rolls-Royce built under VW ownership, this big cabriolet was built on the Bentley Azure chassis. This isn’t just a re-badged Bentley, however, as the team at Crewe festooned the car in every luxury amenity imaginable back then, ensuring the Azure stayed in its place: one rung down on the ultra-luxury convertible totem pole.

Under that long, stately bonnet sits a 6.75-litre Rolls-Royce V8. This monster of an engine uses one turbocharger to produce 325 bhp and a pavement-warping 738 Nm of torque developed from just 2,100 rpm. Its absolutely astounding kerb weight of 2,735 kg makes it heavier than a modern Landcruiser, however, so the Corniche V wasn’t exactly keeping pace with the 360 Modena that Ferrari had just introduced. The top speed was listed at 135 mph, while 0 to 60 happened in a rather lazy 8 seconds. As a Rolls-Royce, though, this car was never intended to amaze with its dynamic performance.

LUXURY WORTHY OF A ROLLS-ROYCE BADGE

The Corniche was purpose-built to be the final word in luxury, meant to provide such a refined driving experience that its occupants forget they are even in a car. To that end, an automatic ride control system ensures that the car stays level and composed under any circumstance. Should inclement weather arise, the wool-lined convertible top will deploy in less than 30 seconds and protect the lavish interior from harm. Connolly leather and exotic wood trim adorn various surfaces inside the car, while Wilton wool carpets provide a suitably soft resting place for your feet. Of course, 2000-era tech like a 6-CD changer and dual automatic climate control were included as well.

In its very short 2-year production window, just 374 Rolls-Royce Corniche Vs were produced. The big cabriolet managed to amaze the motoring press with its extravagance, but many noted the car’s various quality-control issues. BMW sought to rectify those issues after its takeover in 2003, with some success. While there was no direct successor to the Corniche, many consider the second-generation Bentley Azure to have taken up that mantle in 2006.