The Ferrari F40 is perhaps the most iconic car ever, and one of the most common questions I get asked is how many were made? Lots of numbers are thrown around, but this is the best estimate of how many Ferrari F40s there are.

Production of the Ferrari F40 started in 1997 and 1,311 F40s were built in total, of which 213 cars were delivered to the US market. Many have crashed over the years, but there are still well over 1,000 cars in existence. In the UK there are currently 94 road registered Ferrari F40s.

WHY DON’T WE KNOW THE EXACT NUMBER LEFT?

The numbers above show the total number that was made, but obviously, we have lost some of those over the years. The number of cars left is hotly contested! It’s pretty hard to say for sure just how many Ferrari F40s remain for a few reasons:

1. THERE IS NO CENTRAL DATABASE

It would be great if there were a central database of all the Ferrari F40s by chassis number, and where they are today. Ferrari certainly has the model details, and back in 1997 the value of that data just was not realised. Besides, 32 years have passed since the car was launched, and cars have changed hands so many times since.

At SupercarTribe we are trying to build a Registry database of all the cars by their chassis numbers, and it’s a mammoth task! We will get there so stay tuned.

2. IT WAS EXPENSIVE TO BUY

Expensive cars tend to be 2nd, 3rd, or even 10th cars, so minor accidents will almost always mean that the cars will end up back on the road. Cheaper, regular cars are disposable and often uneconomical to repair. That’s not always the case with the Ferrari F40, although see #3!

The F40 is a relatively simple car. The interior is as basic as it gets, the front and rear are complete single-piece units. The problem is the parts are very, very expensive. The kevlar hood, for example, is not easy to fix, and so often parts are changed in whole.

This hasn’t stopped owners spending often eye-watering sums of money to repair crashed cars to keep them on the road. So often you may see images of a crashed car and assume it’s beyond repair. All it needs is a few expensive body panels and a repair expert and its back on the road (simplified of course).

I recently interviewed a Ferrari F40 LM owner who had commissioned a complete restoration of his Ferrari F40 LM to Michelotti Spec. It was fascinating to hear what was involved, and you can listen to the podcast here:

4. THE TALE OF THE RESURRECTING FERRARI F40

Eleven years ago I tried to buy a Ferrari F40 in Saudi Arabia. There were rumours of a super low mileage car that the owner dropped to a garage many years ago and forgotten about.

The car had been stripped back to fix a fault, at which point the mechanic had run out of skills. The car was rumoured to be in boxes and stripped bare. We all thought that the car was lost, but after much searching I found it!

What followed was a game of Chinese whispers with the garage owner and the F40 owner, where I was trying to negotiate the purchase. It seemed that the owner had forgotten that he had dropped the car at the garage!

But having been reminded he realised he liked the car too much to sell. The other factor, of course, was that prices were rising to the point where today prices have reached the £1m price bracket for an average car.

The car was put back together, restored, and then sold through auction. I guess what I’m saying is that even when you think the car is dead, if it’s an F40 it probably isn’t!

I know of a guy who lives in West London in a small terrace house, still with his mum and dad no less. The house is tiny, and the road has next to no parking. The houses are relatively cheap, and generally, it’s not a desirable area to live in.

This chap is also not wealthy and has a regular job as an engineer with an airline. He should not be a Ferrari F40 Owner, yet he is. About 15-20 years ago when prices hit rock bottom, he managed to pick up an F40 for less than the £100k mark. He still has the car today and is only the second owner.

The F40 is stored in a warehouse and comes out only once a year. Neither his neighbours nor friends know the car exists. But it does, and he owns it. Today this low owner, low mileage car is worth well over £1m.

Since the Ferrari F40 is used so little, and the value is now at an all time high, damaged cars are generally put back on the road. This means that more than 1k cars still exist.

WERE ALL THE FERRARI F40S RED?

Believe it or not, not all Ferrari F40s were built in Red, or Rosso Corsa as it’s known in Ferrari speak. But you can be forgiven for thinking it was the only colour was Rosso, because 84% of them were delivered in Red.

At least nine cars are understood to have been delivered in Yellow, or Giallo Fly. A further two cars were delivered in Black (known as Nero), including one ordered by the President of Napoli FC for no less than Diago Maradona himself! Not a bad gift for sure.

A number of other cars have received cosmetic surgery over the years and have had colour changes. Additional Black and Yellow cars have appeared on the market, and new colour resprays including Silver, White, and a variety of shades of blue have also come into existence.

I was fortunate to have witnessed a car going through a blue colour change during a visit to Italy around 2016. I was visiting the Ferrari factory and took my own car to Carrozzeria Zanasi, the official Ferrari garage just across the road from the famous factory wind tunnel.

They had an F40 that they had just completed, changed from Red to Baby Blue with a central stripe! This was definitely a unique car, and although not to everyone’s liking was certainly different. I was fortunate to have seen that car before anyone else did.

On that, if you are wondering why the F40 ended up at Zanasi, let me tell you a little bit about them. If you order a new Ferrari with any sort of special paintwork (stripe, two-tone, etc). The car is painted by hand at the Zanasi facilities, next to the factory.

If for example, the car is Rosso with a stripe, the “body in white” will first be painted at the Ferrari facilities in Rosso Corsa. The car shell will then be delivered to the Zanasi factory for the stripe to be hand-painted. Once done, it is then delivered to the Ferrari factory across the road for assembly. I know this because Mr Zanasi himself gave me a guided tour and explained the process to me.

So there you have it. The baby blue with stripe Ferrari F40 was resprayed in perhaps the most appropriate place in the world. Doesn’t get much better than that!

Some other questions that we are often asked.

IS THE FERRARI F40 RARE?

IS THE FERRARI F40 STREET LEGAL?

The Ferrari F40 was designed with the track in mind, but the car is fully street legal. 213 cars were homologated for the USA, leaving 1,098 cars delivered to the rest of the world. Of these, a small number were developed by Michelotto of Padova creating the LM and GT-E versions for track use only.

WHAT ENGINE DOES THE FERRARI F40 HAVE? 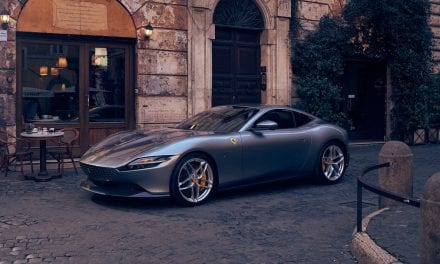