Just a few years into the New Year, and already we have an incident involving an expensive supercar – in this case a Ferrari 599 – being unceremoniously crashed by its careless driver. In this case, the driver was found to have been drinking, and will duly appear in court.

We’re used to supercar crashes in the Middle East, where rich young men are prone t o try and impress a lady friend with their driving skills, yet this incident took place in Sydney, Australia, and saw the bright red 599 crash through the window of an upmarket jewellery store.

The male driver is not reported to have been injured in the accident – and nor was his female passenger – although a 60 year-old woman was taken to hospital for treatment for minor injuries after hurrying to get out of the way of the skidding Ferrari.

Meanwhile in the USA, where certain high-class areas are rife with luxury vehicles, often seemingly driven by people with little understanding of them, a white Ferrari F430 crashed into the celebrity hotspot PUMP in the West Hollywood district of Los Angeles. The cause of this accident is still being investigated.

In a more unusual case, police in California apprehended three supercars allegedly racing across three lanes of a freeway at over 100mph. The exotic trio – apparently a McLaren 600LT and a pair of Lamborghini Aventadors – took some stopping in what was described as a ‘coordinated operation, yet we wonder how they thought they would not be spotted!

It seems that responsible ownership of high-powered performance cars is not a prerequisite to ownership! Keep an eye open for more reports of spectacular super crashes at Supercartribe throughout 2020. 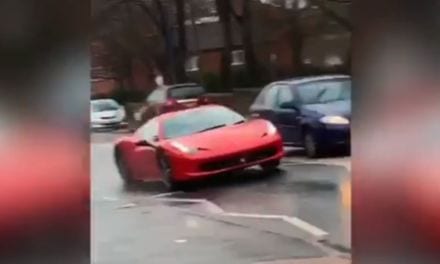