Will the New Rolls-Royce Ghost be Electric? Those of you who revere the magnificent Rolls-Royce 6.75litre V8, an engine worthy of the venerable tag, look away now, for what you are about to read may offend you. There is every reason to believe that the new Rolls-Royce Ghost – of which spy images have been captured – may be the company’s very first electric car.

But don’t get too disheartened; the new Ghost, undergoing testing before hitting the market in 2020, will likely be  hybrid, featuring a petrol powerplant alongside the electric motor. This is the trend with high-class cars these days, so is to be expected.

The current Rolls-Royce Ghost sits upon the BMW 7-series platform. It is expected that the new model will share the bespoke, Rolls-Royce built underpinnings of the Phantom and Cullinan. Hence, the new ‘baby’ Rolls-Royce will be bang up to date when it comes to chassis performance.

The spy shots show a car that is smoother than current model in shape, has a sharper rake to the roofline, and is altogether less outlandish than the current model. A wider grille – in contrast to the tall and very imposing version on the Phantom – gives the new design an appeal that wasn’t there with the current model. In short, it’s a prettier, neater design all-round.

There is no doubt that petrol-electric hybrids are becoming more commonplace on the roads, and the trend extends from family cars to luxury vehicles, with even Ferrari and McLaren getting in on the act.

“Let’s put it this way, Rolls-Royce will produce its first full EV in the next decade, which isn’t all that far away. We are working on it, but there’s still plenty to do when it comes to charging infrastructure both at home and in the public domain before we have a workable solution for our customers.”

His words echo those of many others in the automobile industry. It will be interesting to see what the specifications of the new Rolls-Royce Ghost will be, as details have yet to be released. 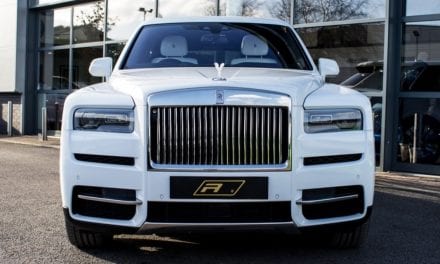 Monday Drool – This SUV is Solid as a Diamond Your Guide to all Current Rolls-Royce Models in 2018