The Ferrari 288GTO is one of the most sought- after of all Maranello products, and is the model that is credited with being the world’s first hypercar. Brutal, yet beautiful, this was a machine designed for performance alone, and it certainly delivered.

Only 272 of the 288GTO were  built, so when one came up for sale at a dealership in Dusseldorf, Germany, that featured as a former owner Eddie Irvine – who raced for Ferrari in Formula One alongside Michael Schumacher – it was no surprise the dealers had plenty of interest.

One interested party, described as ‘quite relaxed’ during a meeting at the showroom, had reportedly been interested in the car for a number of weeks. With a price tag of some £1.75million (around $2.2m at the time of writing) he would have to be a man of means to afford such a vehicle.

Taken on a test drive on a 10km route from Dusseldorf to Neuss, the seller stepped out of the Ferrari to swap places with the prospective Buyer. The man, described as ‘French speaking’, promptly settled in the driver’s seat, and drove away!

The car – distinctive in traditional bright red – has not been seen since, although German newspapers claim that pictures they have published regards the theft show the man approaching the vehicle.

Police are appealing to the public for any information they may have as to the whereabouts of the Ferrari 288GTO, as they have so far found no trace.

Quite what one would do with a stolen vehicle of this virtue and rarity is anyone’s guess. It would be impossible to sell without someone noticing, after all! We hope that the German police find their man and, more importantly, recover an important, iconic and quite magnificent Ferrari. 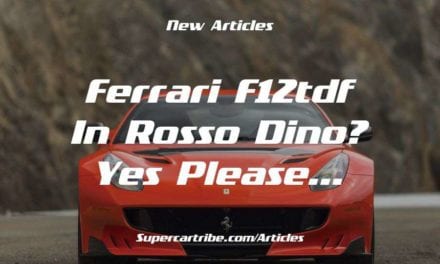