Few would argue that Aston Martin needs any help in the styling department. Indeed, while their cars are rarely, if ever, the pinnacle of performance, they trade on an unmatched elegance in design. Still, that doesn’t stop them from occasionally reaching out to their Italian partner in style, Zagato, to inject from fresh new ideas into their existing models. Such was the case with the 2017 Vanquish Zagato I bring you today. This brilliant blend of British grace and Italian flair makes for a wholly irresistible combination, with a price tag reflecting its appeal. From the integrated fog lights set into the large grille to the classy rear design, loads of Italian spices have been heaped upon this British coupe.

Impressively, 4 body styles are available on the Vanquish Zagato: coupe, convertible, speedster, and shooting brake. This stunning Scintilla Silver version we are examining today is the coupe flavor. Powering all Zagatos is the V12 out of the Vanquish S, meaning it produces 595 bhp and 630 Nm of torque – good for a top speed that just manages to crest the 200-miles-per-hour mark. Still, it’s the bodywork, not the performance, that sells these vehicles. Most striking is the treatment given to the rear of the car – those absolutely unique slotted taillights bisected by a subtle body-coloured wing look as though they could start shooting outo flames any second. Also notice the smaller, squintier side windows and the new body lines jutting their way from the front wheel to the back of the car. There is no mistaking this for an ordinary Vanquish.

This striking coupe is offered by Aston Martin Walton on Thames. Here is what they say about it:

A stunning example of the Vanquish Zagato Coupe, finished in an outstanding colour combination. These cars were sold out before it was revealed at Villa d’Este in 2016. A piece of automotive art.

I agree wholeheartedly that this is motoring art. As such, when you buy a Zagato, you have to factor that into the price. As I mentioned above, this special-edition Vanquish Zagato will set you back a little more than your basic Vanquish S. Adding Zagato oregano to this Aston Martin shepherd’s pie results in a £760,000 price tag – that’s more than a half million pounds over the Vanquish S. Hey, no one said style was cheap.

This car is available at: Aston Martin Walton On Thames. 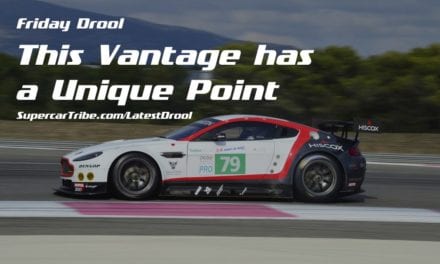