Why Did a Man Drive His Ferrari Off a Florida Dock? A shocking and intriguing news story from the USA, accompanied by video, shows a many driving a Ferrari 360 off the edge of a dock in Palm Beach, Florida. The car promptly sank – as it would be expected to do – and the driver was rescued by boat.

Why did he do it? That’s the bit we don’t know, as nobody is saying, but the story in itself raises many questions. Palm Beach is an affluent area where cars of this type are not an unusual sight – on the road that is, not in the water!

Chatting to the Police

Perhaps the most intriguing element of the story is a dash cam video that shows the driver standing outside of the vehicle, talking to a police officer. The contents of the conversation are not audible, and have not been released.

The man then climbs into his car, starts the engine, reverses, then accelerates ahead at full speed, plunging into the water with some force. The Ferrari reportedly sank into 30feet of water, with a passing boatman fortunately rescuing the driver.

The news is that the Ferrari 360 was recovered from the water – the rescue services used inflatable bags to float the car and then tow it to a boat ramp where it was taken ashore. Unfortunately the Ferrari, a very desirable model, is not a complete write-off thanks to irreparable water damage.

There is no speculation or information as to the events that led up to this rather unusual situation, but the police will be talking to the driver to try and understand why he was determined to drive his expensive Ferrari into the waters off Palm Beach. We’re relieved he is OK, but sorry to see a beautiful car ruined in such a fashion. 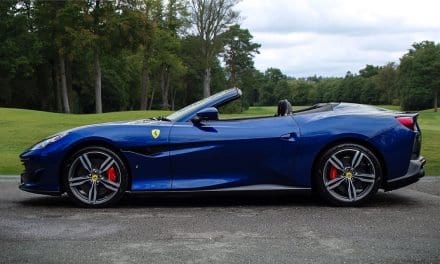