One article describes these men as ‘daredevils’; we’re not so sure! Let’s say you happen to have a beautiful, stylish and luxurious Bentley Continental sitting in your workshop. Would you drive it, enjoy it and put it to its intended use? Or would you engineer a way to fit massive off-road tank tracks to it, and call it the ‘Ultratank’?

The latter is what a bunch of Russians from the YouTube channel ‘AcademeG’ have done, and they’ve released a video too. In the film, the Bentley is seen – minus doors and various other standard parts – mounted on a set of utterly massive caterpillar-type treads, tackling awkward off-road challenges. It looks like great fun, but is it an achievement, or just a ruined Bentley?

While the video was first seen late in 2018, a presenter of ‘AcademeG’ presented a further explanation of the project just a few days ago, saying:

‘All we really need to understand right now from this test drive is whether or not this build is viable.

‘We already encountered some issues with the engine because it’s still not tuned since the previous video with the Bentley.’

‘It’s choking up at the low rpm range, so you instantly need to rev it up, and this type of tech lives in the low range.

‘So this rpm range isn’t compatible, so we will have to solve this a bit later, but today the scope is to verify the chassis.’

In addition to this problem, the vehicle has no brakes, and on attempting a left turn, the tracks immediately fall off the Bentley. This is, they explain, a matter of incorrect tension.

Clearly, the project is a lot of fun, and a way to get people to watch a YouTube channel. We’re not sure that it’s a waste of a good Bentley Continental, but each to their own! 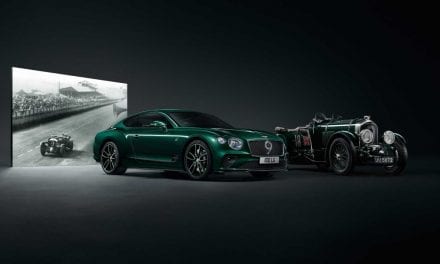