The 3500 Block on Beverly Drive, Highland Park, Texas, features some pretty impressive homes – a number are said to be worth in excess of $10million. So, it would be no surprise to see a 2018-midel Ferrari GTC4 Lusso T parked outside, even one finished in an unusual gleaming white.

That was the sight that the driver of a battered and bruised Chevy Suburban came across when he pulled up there on November 4th. That the keys were in the brand new Ferrari, which was still om trade plates, was a bonus to this lucky man, for he decided it would be a better drive than his old Chevy.

CCTV footage shows the man opening the door of the Ferrari and settling in the driver’s seat, where he remained for some time as he tried to work out how to start it. When he figured it out, he promptly drove the Ferrari away, leaving his Suburban parked and abandoned – along with an open can of beer.

The curious factor is that the owner of the $300,000 Ferrari, which was later recovered intact in Forth Worth, failed to report the theft for 4 days. The police have not said why, and did not initially releasee the camera footage.

The police did of course have the advantage of the Chevy Suburban being on site when they arrived to investigate the crime. The only information they have released is that they do not believe it to be stolen and that it is registered to a Fort Worth man, but they have not confirmed the car belongs to the suspect.

Why the owner of such a stunning vehicle as a Ferrari Lusso T would not report its theft for four days remains a mystery, and simply adds to the confusing and unusual merits of a very suspicious theft. When a Ferrari FXX K is not hard enough, you need an Evoluzione 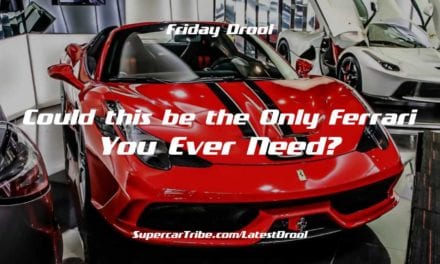