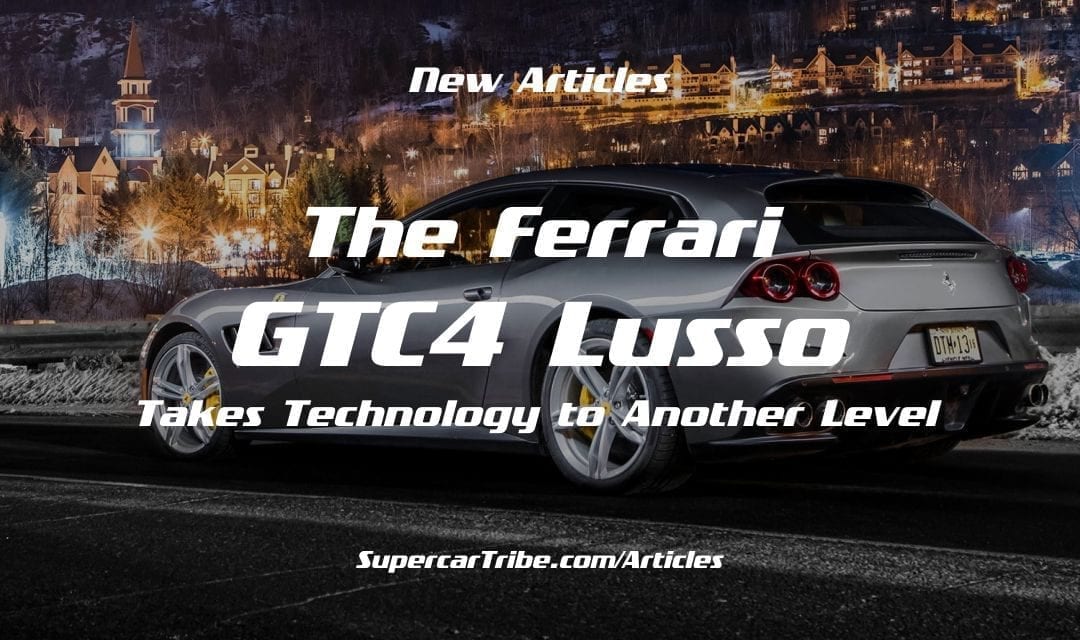 The stunning new Ferrari GTC4Lusso, the factory’s replacement for the wonderful Ferrari FF, continues where that car began as a superbly capable Grand Tourer, with a traditional, tried and tested V12 engine up-front.

Beautiful, evocative and stylish, it doesn’t stop there, for this is a car that is simply bristling with technological innovations that make it one of the most advanced cars on the road, without a doubt.

With all-wheel drive and four seats, the GTC4Lusso is designed to be an out and performance machine as well as a more than capable daily driver, and here’s a few of the technical advances that allow it to do so:

Ferrari 4RM Evo – the in-house name for the specially developed mechanical 4-wheel drive system employed on the GTC4Lusso, this very clever solution involves a separate gearbox – the ‘Power Take-off -Unit’ or PTU – that operates only in set positions and allows clever distribution of power for greater road-holding, as well as saving weight.

Manettino – this is the very clever and sophisticated central control setting that allows you to select certain grip and handling solutions for various conditions. It engages – or otherwise – the PTU for the likes of snow and ice, and can be switched off to render the PTU off limits when, for example, travelling at speeds where it is not needed.

F140 V12 – descended from the very wonderful V12 that made its debut in the Ferrari Enzo back in 2002, the latest incarnation of this legendary powerplant is dubbed the F140. It’s not unique to the GTC4Lusso – you can also find it in the astonishing LaFerrari, among others – but with 681bhp and massive amounts of torque, it helps the GTC4Lusso to speeds of more than 200mph, and can get you to 60mph in a breath-taking 3.4seconds.

Active 4-Wheel Steering – a hugely technical computer controlled central brain keeps the rear wheels aligned as they should be in conjunction with the front, to ensure perfect grip and supremely confident handling at all times. It works with the PTU and other systems to make sure everything is corrected, and also keeps the adaptive ride suspension system in check.

Magnaride SCM-E – this is the active ride suspension system – a similar concept to that used on a variety of luxury vehicles in the GM range – which keeps you comfortable and confident at all times. Its controlled by the Manettino settings, and operates by way of special dampers that react as requested, so you can be as comfortable in the city crawl as you are on the open road.

The technology at work on the Ferrari GTC4Lusso is all designed to operate in the background; you won’t see or feel these systems doing their job because they do it without you knowing. Rest assured, however, that this is one of the most advanced high-performance cars on the road right now.