Do Ferraris come in manuals, or only with an F1 gearbox? Over the years there has been a lot of debate over which gearbox is better, a manual or an F1 gearbox. The difference is often seen as an analogue vs digital driving experience. Many people presume you can still buy a manual gearbox, but is it true? Do Ferraris come with a manual gearbox?

The reality was though that during the production life of these models, very few were actually requested with manual gearboxes. By 2012 very few (if any) were ordered with a manual gearbox. Limited numbers in the Ferrari world means one thing. Premiums on the used market!

By 2014 the models were all replaced, and then in 2016 Ferrari officially announced that the only option going forward will be the F1 gearbox. A manual Ferrari was a thing of the past.

Many people think that Ferrari offered only 3 gearbox options. They are wrong, there were actually four!

WHAT GEARBOX OPTIONS DID FERRARI OFFER?

Today only the F1 gearbox is the available option, and the Auto setting is very comparable to the previously available Automatic gearbox option.

FUN FACT ON THE CLUTCHLESS MANUAL

A fun fact is that for a number of years I actually owned a Mercedes A Class with the same Valeo clutchless manual gearbox that was available in the Ferrari Mondial t. It actually performed really well and never required a clutch change in the four years we owned it.

Since there was no clutch, hill starts were tricky and required the use of the handbrake, but otherwise was better than a manual. Had the F1 technology not have developed so quickly, we may have seen more of these clutchless manuals available across the Ferrari range.

WHY DID FERRARI STOP SELLING THE MANUAL GEARBOX?

Ferrari has always been associated with the manual open gated gearbox, giving that trademark “Clack-Clack” sound every time the gearbox was changed. It was an integral design feature in all Ferraris and the owners loved it.

So what went wrong? Why did Ferrari stop selling the Manual gearbox option for their range of cars? Well, here are 6 reasons why the manual gearbox died out.

The first road Ferrari offered with the F1 gearbox was the 1995 Ferrari F355 Berlinetta. Formula 1 cars had already transitioned from the manual gearboxes to the F1 box, and the sport had benefited enormously from it.

This was also the era led by seven times world champion, Micheal Schumacher. Ferrari owners took the view that if it’s good enough for Micheal, they will be that much closer to being an F1 driver themselves.

For Ferrari, they were keen to push the image of being a company of innovation. The alignment of the gearbox to technology developed for F1 racing suited Ferrari. Ferrari was seen as developing cars with the latest technology in it, and order books were full as a result.

Ferraris were being used more and more each day, from being an occasional car to something that owners could use daily if demanded. The name daily driver was born.

Heavy clutches were often seen as one of the biggest hindrances to using a Ferrari daily, and the new F1 gearbox did away with that. F1 cars still have a clutch, but the gearbox takes the hassle out of having to engage with it manually.

One thing to note though is that many drivers do not know how to drive an F1 gearbox. For example, when in traffic you should put the gearbox into neutral. Most owners do not do this, and as a result, end up considerably shortening the life of their gearbox.

There was a time when if a car did not have an F1 gearbox, it was difficult to sell. The manual gearbox was free and the F1 gearbox was around a $15k option, yet people still continued to spend the extra.

It actually made no sense because the F1 cars were not sold on the used market for the same margin. Nonetheless, buyers paid the premium when speccing their cars new.

The early F1 gearboxes were actually awful compared to modern standards. You had to lift your foot when changing gear, or the gearchange would be jerky. The other downside of not lifting would be an early burnout of the clutch.

But as new models came out along with new versions of the gearbox and software, the changes became quicker and smoother. Jerky gearboxes had been fixed, and now they really could drive like Schumacher.

It was around this time that for the first time the F1 gearboxes were better to drive than the manuals.

As the F1 gearboxes developed they moved from being F1 versions of the manual box to be better than the manual box in every way. For the first time, road cars were being offered with a dual-clutch gearbox.

This meant that as you accelerate the next gear is ready to slot in. This is all thanks to the 2nd clutch which cleverly works out what your next gear move will be. This truly is a gamechanger and makes the gearchange as close to instant as it will ever be!

In 2011 McLaren entered the arena and launched the McLaren MP4-12C. McLaren was Ferrari’s direct competitor on the F1 track and had decided to make road cars to compete primarily with Ferrari.

Like Ferrari, they too packed their cars with innovation, and the owners loved it. In fact, dollar for dollar it offered better value for money than the Ferrari did. Crucially also, McLaren did not offer a manual version of the gearbox. “Flappy paddles” were the only option.

A LOOK AT THE LAST OF THE MANUAL FERRARIS

FERRARI F430 WITH A MANUAL GEARBOX

FERRARI 612 SCAGLIETTI WITH A MANUAL GEARBOX

FERRARI CALIFORNIA WITH A MANUAL GEARBOX

I have owned a number of Ferraris over the years, including manual and Automatics. Strangely though I have never owned an F1 gearboxed Ferrari, although have driven many.

I love the idea of changing gear, and truly believe that something has been lost in this new F1 era. That nostalgic and satisfying feeling of shifting gear and slotting it in place will never be replaced by a paddle. The open gate was a trademark of Ferrari.

Saying that I will concede that the F1 gearbox today is better. Its smooth, quicker, and allows the driver to pilot the car without removing their hands from the steering wheel. On a track that is a huge bonus.

The death of the manual box was inevitable. But which would I choose? Well, I drive a manual V8 as a daily driver, so I’ve spoken with my wallet! 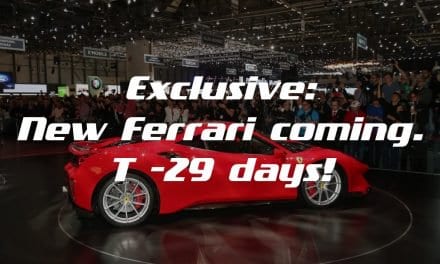