The Formula Drift racing series promises a spectacle like no other, but for Federico Sceriffo and the FF Drifting Department team, the spectacle at Long Beach was not the sort they were hoping for!

The California coastal city, with its long-term links to top-class motor sport, was the perfect venue for the first round of this most exciting form of racing, and the FF team’s Ferrari F599 GTB Fiorano-based drift car promised to be one of the stars of the show.

During runs for the Top 32 battle, the Ferrari – driven by Sceriffo with Chelsea DeNofa – headed straight on into one of the circuit’s unforgiving tire walls, causing major front-end damage.

Cameras following the action caught the most dramatic scene as Sceriffo exited the car, which was now starting to burn, and implored officials to do something to stem the fire.

The marshals seemed to react in a less than urgent fashion, as the hapless owner watched his car become ever-more engulfed in flames. As the fire trucks arrived to deal with the fire, Sceriffo can be seen becoming agitated, pacing around the burning wreck.

It was a sad debut for the mighty twin-turbo powered Ferrari, which had been a crowd favourite, and ideas as to what caused the fire point to a broken fuel line, sustained in the initial impact.

Asked what would happen now, Sceriffo was defiant, adding:

“Fiorella (the Ferrari drift car’s nickname) will be back, more cool, more strong, and ready to work and do her job again soon. I never give up.”

Given the damage, it will take a lot of work, but we look forward to seeing her again, too. 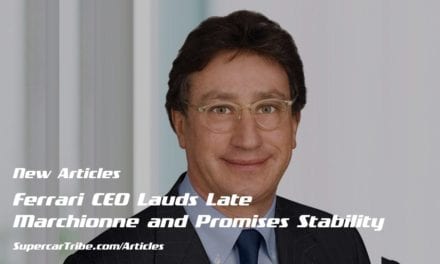