Which is the best Ferrari replica, and are they all rubbish? When most people think of a Ferrari replica they often picture a poorly executed Pontiac Fiero based car, which only resembles a Ferrari because it is painted red. The reality is that 95% of the replicas are very poor. But of course there are always the diamonds in the rough and today we bring you the best Ferrari Replicas of all time.

When most people think man cave, they might picture a small shed outside the house which doubles up as a home office. That’s as far as it gets for the majority of people. Not so for Rod Tempero from New Zealand who transformed his chicken shed (yes kid you not) into a workshop worthy of building a replica of the Ferrari 250 GTO.

Now if you are not aware, the Ferrari 250 GTO is the most expensive car in the world, by far. Only 39 were made, it raced in Le Mans, it won Le Mans, and it looks beautiful. What’s more, they have exchanged hands for around $50m, and are truly in a league of their own.

Over the years there have been some very poorly executed 250 GTO replicas, most of which have been based on a Datsun. They suffers the problem of still looking like a Datsun after the new body has been applied.

What makes this so special is everything has been meticulously hand fabricated and crafted using original techniques. The body has been shaped using handmade wood bucks, and an english wheel. If you are not impressed, understand that they do not make cars like this anymore, but it’s the only way to sculpt a car from yesteryear. It’s very time consuming, and it takes real skill. With the 250 GTO being one of the most complex shapes, to achieve an inch perfect replica is a massive task.

The engine is a period correct Ferrari V12 too, so you can see this is no mere replica. And the price? Well the owner wants $1.2m if he was to ever sell the car!

Check out the video of the car:

I have a confession to make. I don’t know how many times I have seen Ferris Bueller’s day off. At least 50 times? Probably. I’ve seen it so many times I probably know all the words.

The film is great, but the car they chose catapulted the 250 GT Spider California into one of the most desirable cars in the world. When the film was released in 1986 it was an expensive car, but still achievable. Since then all the kids grew up watching the film and lusting after the car. Now they can afford to buy one, so prices have skyrocketed.

Probably the most famous recent owner of an original is Chris Evans, not Mr Captain America but a British Radio DJ  and media mogul. He famously purchased the ex James Coburn, ex Steve McQueen 250 GT California for a mere £5.6m in 2008. He sold it for a decent profit a few years later.

Back to the Ferris Bueller car. You’ll be pleased to know the car that was filmed and crashed in the movie was actually a replica. It was not an inch perfect replica, although it was a relatively good one. So if the car is not perfect why is it here?

It wins here purely on Kudos points alone. It inspired an entire generation of teens to love not just Ferraris, but classic Ferraris. I won’t let a fiberglass body take that away from this car.

Check out the video of the car:

3. 1957 FERRARI TESTAROSSA RECREATION – A FERRARI BUT NOT AS WE KNOW IT

There are replicas, and then there are recreations. The number three spot goes out to all high quality recreations, this one just happens to be the best of them.

WHAT IS THE DIFFERENCE BETWEEN A REPLICA AND A RECREATION YOU ASK?

A Replica is usually based on a different car, or a different Chassis, whereas a Recreation starts off life as a Ferrari and is stripped and rebodied as a different and more expensive Ferrari model. Usually done as perfect recreations of the original car, using original parts.

This particular car started life as a 1957 250 GT, until DK Engineering got hold of it. They are well known Ferrari restorers located just outside London, and have among them some of the best craftsmen in the world. Just like the GTO we saw earlier, this Testarossa is as good as the original, if not better.

The owner of DK, David Cottingham, was actually working on the restoration of an original 250 Testarossa at the time and wanted to create a perfect replica for himself. Since he already had the original reference point at hand, creating the copy was made much easier.

It also means this is perfect down to the very last detail. What’s best is the Chassis, Engine, and Gearbox are all Ferrari, and period correct.

If you want to see a Ferrari 250 Testarossa Recreation in action, check out this video of a car that was sold some years back:

There is another great video of an american car that is yet to be finished. That didn’t stop the owner from enjoying it though.

If you grew up in the 1980’s you will know Miami Vice. No millennials. I am not referring to the poor film of the same name made more recently, I mean the original TV show. Any Ferrari fan will know there were two cars featured in the show, a white Testarossa and a black Ferrari Daytona.

The TV producers asked Ferrari of North America to provide a car for filming, to which they were politely declined. In most cases that would be the end of it, but instead they commissioned replica cars to be built for action shots.

Admittedly the Corvette based replicas were not perfect and differences included variances in windshield rake, side markers, door handles, sun visors, width variation and side vent windows. Not perfect, but like the Ferris Bueller example, it cemented the car in viewers minds.

The producers knew that the car was not inch perfect, so to overcome this they used an actual Daytona in some shots, with the car on a flatbed trailer. Obviously not trusting Crockett behind the wheel!

Trust me this is not as bad as it sounds! The Ferrari F40 is without doubt the greatest Ferrari ever made. In fact it’s possibly the greatest car ever made. It has a timeless design, is perfect from every angle, and is just as great to look at today as it was when launched 33 years ago.

The timeless design was Enzo Ferrari’s greatest achievement, and also his last. The car exceeded the 200 mph barrier, a major achievement for its day. On a practical level it wasn’t. The back was all engine, and the front was wheel well. The interior was basic. No carpets, and no stereo.

Despite all that the car made it to the wall of every teenage boy, so it’s no wonder those boys became men and started buying them up. Prices rose, and despite being fairly common (1311 were made), good examples are hovering around the $1m mark now.

It’s no surprise that replicas were made, and to be honest they were all rubbish. Until now.

First the controversial part. The engine. Yes it may have a Lexus V8 engine, but it doesn’t stop there. It also has two massive turbochargers and intercoolers giving the car a total 750 hp of raw power. This car doesn’t just sound good, but sounds almost as good as the Italian original too.

The body is an exact replica of the F40 LM body, and used molds of the original. However although Kevlar and Carbon Fibre were used, this also uses Fiberglass. Something not seen on the original car.

Purists will look away in horror, but you have to commend Steve Cox who built the entire car, chassis included, as a pet project.

If you want to see how impressive this car is, just check out the video:

Let us know in the comments section below if you feel any other Ferrari Replicas are worthy of being included in the Best Ferrari Replica list. Please don’t mention the F355 from the movie The Rock. It’s really not worthy! Need to get your Christmas tree in a hurry? You need a Ferrari GTC4 Lusso 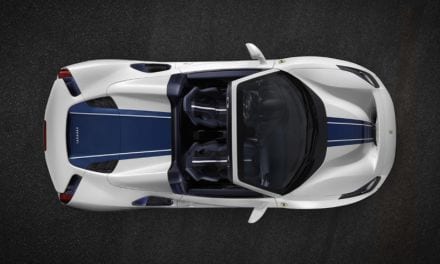