Ferrari is neither a horse nor a type of horse. It is actually a fairly common Italian surname and was the surname of the Founder of Ferrari, the legendary Enzo Ferrari. He started making Ferrari racecars in 1947, and the horse was his logo.

But the horse in the logo pre-dates Enzo himself. So where did the horse come from you may ask? It’s a good one, involving the Duke of Savoy, a Countess, and Porsche! All shall be revealed!

It always amazes me the number of people who ask me this question, assuming that the horse in the Ferrari logo is a type of Stallion called Ferrari. I guess it is not surprising really because the name and the prancing horse have always appeared together since the very first car.

Whatsmore Lamborghini is well known to have used the types of bulls in the naming of their cars. One could assume it was an Italian thing and Ferrari had done the same, but that is not the case.

The cars took the Founder’s Ferrari surname, who was a racing mad Italian who prior to building his own cars worked as a racing driver and team lead for Alfa Romeo. He was hugely successful and clearly knew what he was doing as early as 1923 when he won his first Grand Prix.

His racing team had already taken the name Scuderia Ferrari, even though it was being operated under the Alfa Romeo umbrella. It was whilst at Alfa Romeo that he met the parents of famed World War One fighter pilot hero Francesco Baracca, who had died in action.

THE ITALIAN WORLD WAR ONE HERO

Francesco was a Count, and also Italy’s most celebrated fighter pilot of this day. He was a national hero and is famous for having shot down a German plane over the German pilot’s home town of Stuttgart.

It just so happens that the city of Stuttgart’s coat of arms also has a prancing horse, and rumour has it that Francesco took the logo as a taunt to the city of Stuttgart. That’s actually not quite true, but it is the reason why Porsche has the horse and the word Stuttgart on their logo. For Porsche it is a tribute to their home city.

Francesco’s plane had itself been painted with the now-famous Prancing Horse on the side, but if it didn’t come from the Stuttgart incident where did it come from?

THE ORIGINS OF THE FERRARI LOGO

The logo actually dates back to 1692, the year that the Duke of Savoy, Vittorio Amadeo II, founded one of the most celebrated cavalry outfits of Piedmont and Italy. The prancing horse was prominent all flags and uniforms for officers in the regiment.

Fast forward to the 20th century of one of the most celebrated cavalrymen joined the newly formed airborne Squadron. Yup you’ve guessed it, that member was Francesco Baracca, and it seems he took his logo with him.

Enzo Ferrari only told this story once. In 1923 having just won a race at the Savio track, he had a chance encounter with Francesco’s parents. He told them of his racing ambitions and it was the mother, Countess Paolina of Ravenna who said to him

Put my son’s Prancing Horse on your cars.

It will bring you good luck”

Enzo then explained that the horse was and still is black, and the canary yellow background was added by Enzo. The Yellow shade is the colour of Modena, the region where Ferrari’s are made.

I am sure even Enzo could not have realised at the time that he was creating one of the most recognisable brands in the world. But the logo did not appear for another 9 years until the 1932 Spa Grand Prix.

THE PRANCING HORSE ON ALFA’S CARS

That was the first time they appeared, but not on a Ferrari car, but under the Alfa Romeo umbrella. Ferrari was operating as the Scuderia Ferrari racing team within, as part of Alfa Romeo. But that was of course before Ferrari actually made any cars under their own brand name.

Everything they were doing at this point was for Alfa Romeo. A year later that all changed as Alfa Romeo hit financial problems, and they pulled out of racing. That left Scuderia Ferrari operating on its own, but still racing Alfas.

Over the years the Prancing Horse logo became even more prominent with the Scuderia, but eventually, Alfa bought out Enzo’s shares to refocus on their new racing ambition. With the onset of World War Two, Enzo started to develop machinery needed in the war effort and the racing car ambitions were all put on hold.

The war finished in 1945, and by 1947 Enzo had rebuilt his Maranello workshop after it was bombed.1947 also saw the first Ferrari cars roll out through the gates, with the first car being the Ferrari Tipo 125S. On the nose of the car was the first Ferrari version of the logo, a square logo with a black horse on a yellow background. The SF of Scuderia Ferrari had been replaced with Ferrari.

THE STORY OF THE PRANCING HORSE DOESN’T END THERE!

If you think it ends there, it doesn’t. If anything that is the start of the new phase and the logo has evolved over the years.

1692 – THE REGIMENT BANNER OF THE “REGGIMENTO ROYAL PIEDMONT”

This is the Prancing Horse that Francesco Baracca borrowed from his regiment.

Countess Baracca sent this remembrance postcard to Enzo Ferrari in 1918, in honour of her late son.

THE PRANCING HORSE OF ENZO FERRARI

Ultimately the prancing horse logo changed to this image below. But not before going through a number of versions!

1922 – AN EARLY VERSION OF THE PRANCING HORSE

This is the first version of the prancing horse, that became the basis for the Alfa Romeo cars. Note the shield design, and Italian flag colours added to the top of the shield.

The prancing horse shield was adapted slightly in 1931 and applied to the Alfa Romeo race cars.

For the first time, Enzo was branding the cars not as Scuderia Ferrari, but simply as Ferrari. This is the first script that was designed for the car and all official letters.

Enzo was getting ready to deliver the first cars, and so started to advertise. Both Prancing Horse and Ferrari script are present.

The new square logo is born.

Note that the horse has been reduced slightly in size to increase the yellow space on the logo.

An advertising page from 1955 shows both logos of the time. Imagine buying those cars then, and how much they are worth now!

The badge had changed slightly. The horse was more upright, larger, and had lost the silver accents giving it an all-black look.

1994 – REDESIGN OF THE PRANCING HORSE SHIELD

The shield was becoming more popular with road cars, and the shield logo was slightly redesigned. Overall a cleaner design.

At the same time the square badge found on the nose of cars was also redesigned and given the same treatment.

By 1994 corporate branding was becoming ever more important, and corporate identity guidelines were also updated.

The signage at the Ferrari Factory was also updated, showing the new style logos. The change was likely to have been applied in 1994.

The logo was updated once more, with a slightly more updated horse in the logo.

Again a slightly more upright horse in the logo, but also the overall shape was now proportionally wider too.

Although some of the changes are subtle, together they add up to quite significant changes to the appearance of the badge.

The biggest change in the script was the dot above the letter i. It was now a cleaner design.

Showing the sublte yet effective changes of the prancing horses from 1994 to 2002.

The corporate branding was updated at the same time to ensure a common brand image across the world.

So that is the story of how the logo a Viscount in 1692 made its way to the most desirable cars in the world. Its been a pretty amazing journey, but with Ferrari at a young 73 years old, we’ve only just got started!

Want more? Check out this video from Ferrari: 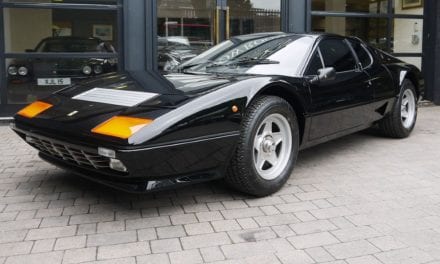